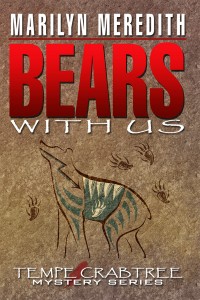 About Marilyn Meredith
Marilyn Meredith is the author of over thirty published novels, many award winning, including the Deputy Tempe Crabtree mystery series. Bears With Us is the latest release. Writing as F. M. Meredith, her latest Rocky Bluff P.D. crime novel is Angel Lost, the third from Oak Tree Press. Marilyn is a member of EPIC, Four chapters of Sisters in Crime, including the Central Coast chapter, Mystery Writers of America, and on the board of the Public Safety Writers of America. She’s also a been an instructor at many writing conferences including the Maui Writers Retreat, Central Coast Writing Conference and many others.
Visit Marilyn online at http://fictionforyou.com and her blog at http://marilynmeredith.blogspot.com.

About Bears With Us
A burglar turns out to be a bear and Deputy Tempe Crabtree and her pastor husband, Hutch, chase the bear out of the house. This is their first encounter with a bear and the occupants of the home, an elderly couple and their daughter—and it isn’t the last.
A bear turns up at the school, at a restaurant, an apple orchard and two more homes. That is only part of what Tempe is called to handle. A teenager’s suicide, a mother who doesn’t like her daughter’s boyfriend, a wandering senior with a strange form of Alzheimer’s, and a long ago love affair keep Tempe hopping. 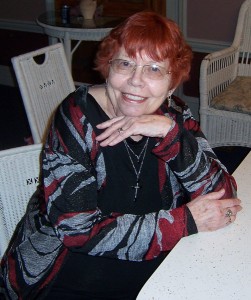 Read an excerpt!
The highway twisted more and more the higher into the mountains they drove. Tempe slowed to turn onto one of the few roads that left the highway. Also two lane and much narrower, it wound around even more. “Watch for the mailbox with their name on it. I think it’s a shaped like a house with a shingle roof.”
“I will…”
Tempe switched off the emergency lights. No need in alerting a burglar of her approach.
“There it is,” Hutch said.
She pulled into the lane, pine trees bracketing either side. The lane climbed a bit before widening into a flat spot. A silver Scion sat off to the side of a three car garage. A wide porch ran around the front and sides of the two-story cedar structure. All the windows were dark.
Tempe grabbed the shotgun from its holder under the dash. “Don’t shut the doors. Be as quiet as possible.”
Chimney smoke scented the pine and cedar laden fall air. Holding her flashlight in her other hand, she kept the beam low as they climbed the three steps leading to the front door. It stood open. Unfortunately, many people living in the mountains didn’t think it necessary to lock doors.
The minute Tempe stepped inside, she knew what was happening.
The tell-tale snorts and slurping sounds told the tale. It was no longer necessary to be quiet. “Bear.” Bears had gotten smart over the years, learning how to open trash cans and open doors. Sometimes just leaning their heavy bodies on the barrier popped the latch. If a window was left open, a screen never stopped a bear.
Hutch grimaced and peered toward the area where the noise came from. “Are you sure?”
“Positive. Run upstairs and let the residents know what’s going on. Ask to use their phone and call Fish and Game. I know my cell won’t work up here. We might need some help. Then come back down and help me chase it or them out.”
Posted by Rebecca at 12:01 AM

very fun plot in the story.

love those with bears in it,