From Chapter 21 of Secret Lives:
The Wintergreen Sisters have come from snowy Minnesota and tried to take over the circle. When they are rejected, they start a war, using the weather as their weapon.
Thunder and lightning, wind and hail remounted their assault, and across Temple Avenue another palm tree fell, pulling down more power lines. The shadow over the house broke up into individual forms, shadows with great black wings and iron beaks. Hearing the sounds of sirens, the women understood that the siege being laid to Emma Clare’s house was spreading throughout the city.
Herta stood up to marshal her forces. “There’s no time for ritual. But we have to set up a circle of protection.” She looked at Emma Clare, who nodded.
Julia rushed into the kitchen and returned with four more candles and a box of salt, for protection. Without a word, Cairo took the salt and began a fast but deliberate circuit around the room, laying a thin line of salt and murmured words on the hard wood floor just beyond the old flowered carpet. At the same time, Julia, Verlea, Milly, and Sophie each picked up one of the new candles and moved toward the boundary Cairo was drawing. Whispering brief invocations, they lit their candles and stationed themselves just inside the circle, less than a yard from the walls that the powers outside were ramming with enough force to knock to knock the china figurines off the mantelpiece.
Steered by the Green Man and the scholar, the defense was renewed from another angle. A body was ripped open. Claws flexed, an axe hurled, targets struck. Tearing and breaking and bleeding.
Vulnerable places protected by an earth-solid shield. Dodging, sudden attack from nowhere, from everywhere.
Hippolyte. Badb. Kali. Fea.
Holy Goddesses, come to our aid.
Protect our home
Our land
Our people
Dark and bright female forms carrying ancient weapons. Slashing, shielding, attacking, regrouping. No quarter given, no mercy, no pity.
Sounds of horns and thunder.
Sudden silence.
Something great and black, then small and yellow falling. A green and gold form diving. Recovery, great and black again, cawing, flapping great wings, rising. A snap, a shattered wing. Falling again, pale yellow streaked with red. Archaic riders, galloping and hurling invincible weapons.
Suddenly and endless gray fog obscuring other dark forms. Ice crystals and freezing winds. Cold water from a deep, deep well. A towering tree, frost-covered, shaking, sinking. Dark ones. Giants, wolves, frost and unbearable cold. Stars and faint echoes of human energy. An obese old woman, eyes closed, protecting her people. A tiny dark woman gesturing.
From far, far away, women, somewhere, standing. Did those women still exist?
Holy Powers, come to our aid.
Minerva. Tadatagei. Shakti.
Holy Forces, be with us today.
Giant ravens attacking, dragon, cat, and goddesses defending our women. How will this war end? What will be its consequences?
Buy this book! http://www.amazon.com/Secret-Lives-Barbara-Ardinger/dp/1466251786/ref=sr_1_7?s=books&ie=UTF8&qid=1316117982&sr=1-7
Check out the FREE READER’S GUIDE: http://www.barbaraardinger.com/secret-lives 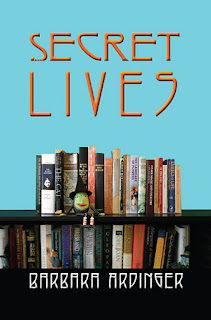 About Secret Lives
Secret Lives is a big novel about big issues—aging and death, the way our society treats its senior citizens, women’s friendships, the powers of love, the theory and practice of magic, the rebirth of the Goddess and Her ancient religion. It’s about the untidy mysteries of human life. As the baby boom generation ages, the issues in Secret Lives become more significant to readers and also more recognizable. Issues that used to matter only to their parents are now starting to pop up in the boomers’ own lives. This novel will thus appeal not only to the large audience that reads pagan fiction, but also to mainstream readers who love a good, complicated story and may have heard about pagans and gods and goddesses. As they read, they will learn a great deal.
Each chapter is a standalone story, although there are two arcs that comprise two stories and three stories. The bulleted notes that follow the barebones outlines and show how the stories are braided together and explain many of the allusions. An event may be foreshadowed in early chapters, for example, be the major plot of another chapter, and be resolved or echoed in later chapters. Likewise, people who appear as minor characters in some chapters become major actors in other chapters.


You can read more about Secret Lives at www.barbaraardinger.com
Visit the author’s tour page at Pump Up Your Book
Purchase Secret Lives
Follow Secret Lives on Facebook 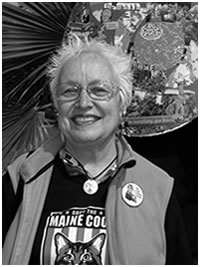 About Barbara Ardinger
Barbara Ardinger, Ph.D. (www.barbaraardinger.com), is the author of Secret Lives, a novel about crones and other magical folks, and Pagan Every Day: Finding the Extraordinary in Our Ordinary Lives, a unique daybook of daily meditations, stories, and activities. Her earlier books include Goddess Meditations, Finding New Goddesses (a parody of goddess encyclopedias), and Quicksilver Moon (a realistic novel … except for the vampire). Her day job is freelance editing for people who have good ideas but don’t want to embarrass themselves in print. To date, she has edited more than 250 books, both fiction and nonfiction, on a wide range of topics. Barbara lives in southern California.
Here's the Facebook page for my new novel, Secret Lives: http://www.facebook.com/pages/Secret-Lives/140993335978461
Posted by Rebecca at 7:14 PM