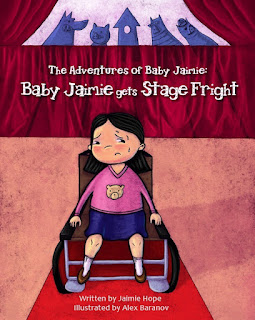 About The Adventures of Baby Jaimie
Baby Jaimie is in her first year of school. She has made a lot of friends and learned a lot of things. Now she will learn what it means to be a team player when she is in her very first play. Follow Baby Jaimie as she learns the lesson, there are no small parts, only small actors.
The Adventures of Baby Jaimie Book Excerpt
"Please quiet down class," Mrs. Johnson said as she entered the room.Mrs. Johnson was Baby Jaimie's kindergarten teacher. All the kids liked her, especially Baby Jaimie. The kids all quieted down and turned their gaze to their teacher. "Sorry I'm late," Mrs. Johnson continued as she put a pile of books on her desk. "I had to speak to our principal, Mr. White. I have a surprise for all of you. We're going to do a play."
The kids looked at one another and then back to Mrs. Johnson. Finally, Baby Jaimie asked, "What's a play?"
Mrs. Johnson smiled and wondered aloud, "How can I best describe a play to you?
There was a long pause and Baby Jaimie was starting to think her teacher didn't even know when she heard the woman clear her throat and say, "A play is like a story that is acted out on stage."
The children continued to just stare at their teacher, so she continued to explain. "it's like when you play house. You're not really mommies and daddies, and the dolls aren't real babies, you're just pretending. People who are in a play are just pretending to be characters they're not."
"Like on television?" Dennis said from the back row.
"Yes, just like on television!" Mrs. Johnson said. She was relieved someone in the class understood what she meant.
"What story are we going to be acting out?" Baby Jaimie's best friend, Jane asked.
"I don't know, Jane. There's so many wonderful stories to choose from I can't decide. That's why I brought this pile of books in with me today. We're going to go through them, so we can decide which one we want to do. Won't that be fun?"
The whole class cheered in reply. When they finally quieted down again Mrs. Johnson had them sit in a circle on the rug, like they did every day for story time. Today, instead of reading a book she would just read them the titles of each book and tell them what they were about. There were too many to read in one day and they still had to cover their lessons for the day.
About Jaimie Hope
Jaimie Hope was born in New York and it was in high school, when she joined the newspaper staff and decided she wanted to be a writer. Jamie received her Associates degree in 1999. Then she moved to Florida where she was an active volunteer in the local historical society and remained active in the arts. In 2005 Jaimie wrote her first children's book, The Adventures of Baby Jaimie, published in 2006 and Who Says You Can"t Go Home? in 2008. The Adventures of Baby Jaimie: Baby Jaimie Goes to School in 2010. Her Autobiography, Roll With It followed by the third volume in her children's series, The Adventures of Baby Jaimie: Baby Jaimie Gets Stage Fright, and her first Paranormal Romance, When You Come Back To Me Again were released in 2011.
Purchase the book in kindle or book form at Amazon.