Story of The Week 23 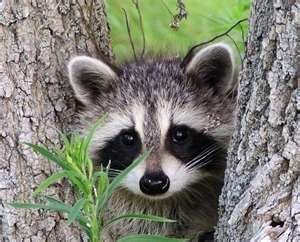 Hello, How do you do?

This week, we have more outstanding writers joining us, and it is absolutely fabulous to read many cool entries, your imagination is divine.

I give the winner to  Belva@MainelyMugUps , enjoy!

It was a sunny day in mid-July with blue skies and big, puffy, white, cumulus clouds. I decided to stretch out on the grass in one of our apple orchards under the shade of one of the more ancient apple trees to rest and either take a brief nap or daydream for a while. It was the first time I’d been quiet all day. I was an exuberant child and at the age of eight couldn’t bear to be motionless for any protracted period.

I looked above me as I reclined under the tree and watched the sun glitter through the leaves. I smiled and began to nod off. I’m not sure how long I slept, but when I awoke I was surprised to see I’d been joined by a friend of sorts. It was a tiny raccoon kit. I had been so still that he hadn’t paid my presence there any mind. I slowly tried to sit up which caused him to come to a complete halt. Then he turned and scampered off to find his mother.

As I sat there watching him, I couldn’t help but come up with an almost limitless supply of stories to tell about my encounter with my small furry friend. I’d heard that raccoons were notorious for carrying rabies, so I planned to make up a tale about being bitten by a rabid raccoon.

I noticed that the blue sky had taken on a more ominous appearance. The formerly white, puffy clouds had turned dark and threatening, so like the raccoon kit, I scurried for home to find my own mother. I didn’t make it in time to avoid the rain. It began coming down in torrents and I ran as fast as I could and reached the gate in the picket fence just as the thunder began. I really didn’t differ much from the kit. I was as anxious as he seemed to reach the safety of my mother’s arms. I hurried through the screen door into the kitchen where my mother was cleaning greens from the garden to go along with our dinner. I always hated Swiss chard and swore uphill and down that it had a bitterish taste that I couldn’t stand. It never did any good to protest. I had to eat them regardless of my pleas for mercy.

Mother noticed that I was out of breath from running and was soaked to the hide. She ordered me to go take a warm bath and get ready for dinner because we were going to have guests. I was thrilled to hear this because I intended to regale them with my tale of the rabid raccoon.

When dinnertime arrived and we were gathered around the table, I smiled a sly smile and waited for my opportunity to begin, but it never came. The adults didn’t stop talking for a single minute.

They chattered endlessly about politics, religion, and other boring topics, until, at last, I blurted, “I was bitten by a rabid raccoon.”

Then I began to wail as though my heart would break. My mother exclaimed, “Why didn’t you say something earlier?!!”

I continued to cry and my father asked, “Where did he bite you, Cynthia?”

“In the orchard under an apple tree,” I answered between sobs.
My father was well accustomed to my habit of telling tall tales, so he smiled. Then he said, “You may be excused. Go to bed now, dear."

excellent, keep it up.