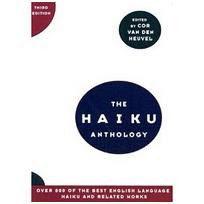 Hello and welcome to Bluebell Books Poetry Paradise. I'll be reviewing The Haiku
Anthology (3rd edition) edited by poet and past President of the Haiku Society of
America, Cor Van Den Heuvel.
Haiku is a form of poetry practised in Japan since the seventeenth and eighteenth
centuries, and has become popular in the western world since the 50's when it was
discovered and published in the English language.
Haiku is defined as
(1) An unrhymed Japanese poem recording the essence of a moment keenly percieved,
in which Nature is linked to human nature. It usually consists of seventeen onji
(Japanese sound-symbols).
(2) A foreign adaptation of (1). It is usually written in three lines of fewer than
seventeen syllables.
The Haiku Anthology (page 330).
I would recommend this book to those initiated to the beauty of Haiku as well as those
who have not yet been introduced. Cor Van Den Heuvel writes in an accessible style
free of jargon which is based on a sound knowledge of his subject matter. He covers
the history of haiku and senryu, the growth of the modern haiku movement, and the
philosophy behind this art form.
Van Den Heuvel has selected 800 haikus and senryu poems written by 89 poets to
include in this anthology. He has chosen poems which mirror the haiku ideals of being
present in the human experience and connected to nature. I enjoyed the variety of
subject matter within the poems and think he has achieved the perfect balance of topics
to interest all readers.
I will leave you with a charming poem by John Wills from The Haiku Anthology
(page 288)
supper done...
the old folks sit
on the porch
And a traditional Japanese poem and its English translation by famous haiku poet
Basho
ume ga ka ni
notto hinoderu.
yamaji kana
scent of plum blossoms
on the misty mountain path
a big rising sun
Cynthia Marston
Posted by Olivia at 1:47 AM


Haiku is part of fun in poetry,
keep it up.


Haiku is part of fun in poetry,
keep it up.