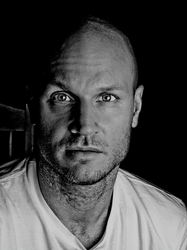 About the Author:  Burroughs was born Christopher Robison in Pittsburgh, Pennsylvania, the younger of two sons to poet Margaret Robison and John G. Robison, former head of the philosophy department at the University of Massachusetts Amherst. He is the younger brother of fellow memoirist John Elder Robison. He was raised in Massachusetts, including the towns of Shutesbury, Amherst and Northampton. His parents divorced on July 29, 1978, when Burroughs was twelve years old, and he was adopted by his mother's psychiatrist who resided in the area.
Burroughs dropped out of school after the sixth grade and obtained a GED at age 17. He chose his name at age 18, and legally changed it in .[1] He later enrolled at Holyoke Community College in Holyoke, Massachusetts as a pre-med student, dropping out before the end of the first semester. He decided to settle in New York City and worked for a Manhattan-based advertising company. In 1996, he sought treatment for alcoholism at a rehabilitation center in before returning to Manhattan.
His books are published by St. Martin's Press and Picador. Some of his childhood experiences were chronicled in Running with Scissors (2002), which was later developed into a film.
(From Wikipedia)

Story Summary: A disturbing memoir of a young boy who was shuttled off to live with his mother’s psychiatrist, Running with Scissors, is a penultimate experience of dysfunctional family systems. Controversy surrounds the author’s account of his childhood and teen years which were marked with uncertainty, a mentally ill mother, a bitter divorce that included alienation from his father, and life in the bizarre home of his mother’s psychiatrist.
The reader will be amazed at the boy’s ability to survive the circumstances of his life which included his dropping out of school after 6th grade, his suffering sexual abuse at the hands of a pedophile and a psychiatrist-mediated fake suicide attempt in order to excuse him from attending school.
Although the names of his adoptive family and his own family were changed in the telling, Burroughs is now facing a lawsuit by the children of the psychiatrist who claim that his account grossly misrepresents the family.
Regardless of the controversy, Burrough’s poet-mother and his own attachment to journaling helped him succeed in a crafting a brilliantly-told story that is loaded with humor. This memoir has had a long run on the NYT’s best sellers list.
Recommendation: **** for the quality of the writing, but I caution that this story is more than a little disturbing. Graphic sexual content calls for discernment.
Posted by Victoria Ceretto-Slotto at 3:16 PM

Burroughs is a fantastic writer. I have read all of his books, and yes, 'Running with Scissors' is a harsh read.

His other book, about his father, 'Wolf at the Table' is chilling.

Victoria,
Thanks a lot.

This is one of those books I've thought about reading, then somehow forgotten about. From your review, I think I'll give it a go.