Book Review – Just a Few Seconds, A Story From the World of Music and Beyond 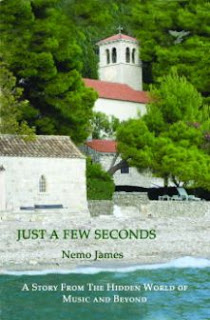 by Stephanie DiPaola
Before Reading Nemo James memoir “Just a Few Seconds; A Story From the Hidden World of Music and Beyond” you must first go to www.nemojames.com or go to YouTube and listen to his music.   Listen to the melody of his memories and then read this book. It is in the experience of his life, that you can hear the passion and love he has for music. In his song; The Poet, he sings of a man discouraged but determined to share his gifts to the world.  Most strikingly, the line; “through the years reality has scourged him but compromise will never block his path…” in so few words the mantra of a man’s life touches the heartstrings of any who have dreamt of pursuing their dreams. This line encompasses the journey James has lived, and emotionally allows his audience to see who he is through his greatest love, his music.
“Just a few seconds,” details the experiences and adventures he’s faced as a musician. Each passage gives his audience a brief taste of what it is really like to be a musician, how others responded  to him and most importantly his motivation to keep searching for his dream. His dedication to his art lead him to some of the greatest experiences some could only dream of. He expresses all the perks; such as traveling though Europe and performing for celebrities; “The palace soon filled up and everywhere I looked there were faces of the rich and famous…The clothes, the flowers, the decorations, the furniture and ornaments, the servants in their immaculate uniforms, everything was amazing.” (74)
It is a rare gift knowing that you want to do something for the rest of your life, but Nemo James was able to live his dream by continually allowing the changes in the industry to shape his musical education. Though shaken by the most difficult of times James’ ability to find some opportunity amongst the dourest of circumstances reflects on the importance in the ability to have faith. Through heartbreak and loss, Nemo James believed that through his songs and having hope and faith in his art would bring opportunity.  Through the entire work the most memorable quote for me was one that revealed his deepest emotions; “I saw creativity as a lake that we all have inside us. Some people never even know it’s there, some dip their toes into it and some drink from it. I had fallen in and felt at times that I was drowning.” (83)

Through these very words James’ ability to capture his journey allowed me to enjoy his message of faith and hope in ones abilities. Having the confidence to continue being the lone guitarist who wants to share his gifts to others inspired me to look beyond his struggles and see the journey of an artist. Nemo James’ memoir will captivate and push you to see past the struggles in your own life, and find faith in the “creative lake,” inside you.

Thanks for the kind words about my book. It is a touching thought that my story might inspire others to keep going when they think all is lost. To those who do have to give up I would say remember that everything is connected and that somewhere in the future you will be offered an opportunity to reconnect to what you thought you had lost.

A very impressive book review. Thanks for sharing Stephanie.

what a stunning book review,

thanks for sharing, Nemo and Rebecca.

One of the best book reviews I have ever read...sounds like the perfect book for my shelf!